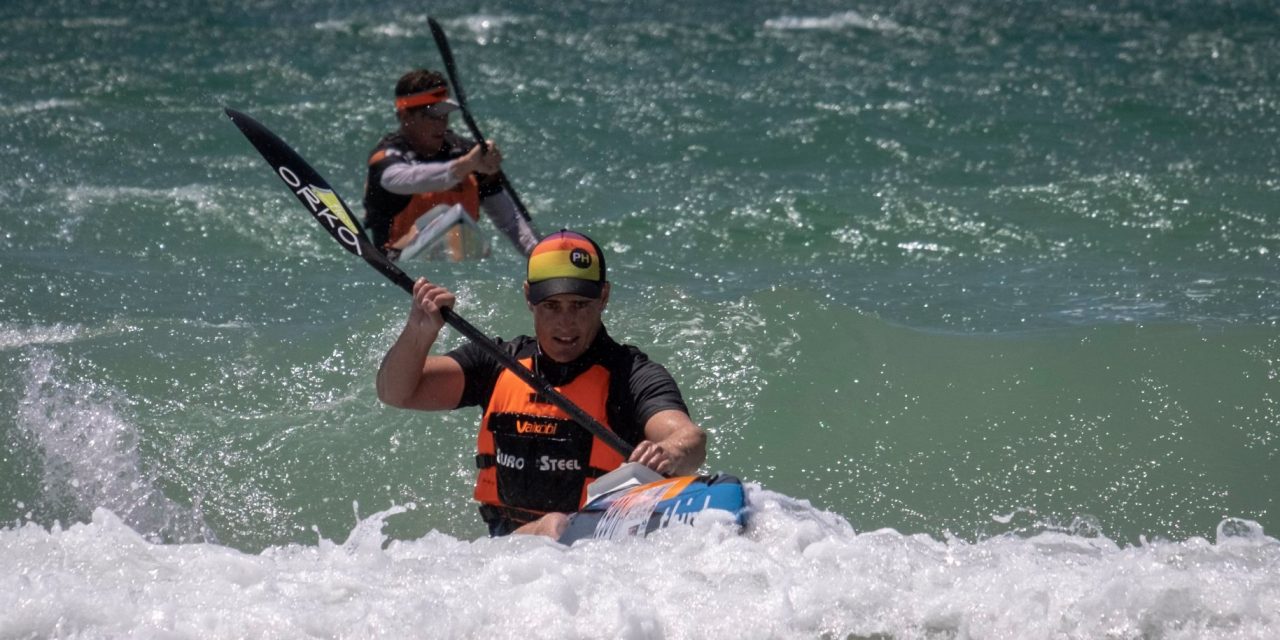 In 2017, when Kenny Rice broke through for his first win at the iconic Cape Point Challenge, his winning margin was more three minutes.

So on Saturday, when he found himself locked in a fiercely-fought dice with his best friend and talented surf ironman Nicky Notten – just kilometres out from the finish at Fish Hoek beach – it truly was uncharted waters.

“The whole way I was thinking, ‘I’m going to lose a Cape Point Challenge in a beach sprint!’” He laughs.

But unlike previous instalments that ran on an out-and-back course, this time, paddlers raced 50 kilometres over three laps from Simonstown to Millers Point.

And after three and a half hours of racing, it went down to the wire.

“When I got into the final bay, I chased this run and thought, ‘OK, this is it.” Rice says.

“When I fell off it, I had this wave of panic as I turned around and saw Nicky flying down a run towards me.

“I only thought I had it when I actually hit the beach… because I’m not known for my running!”

Rice crossed the line five seconds ahead of Notten to record his third title at the revered event.

Melanie Van Niekerk claimed the women’s title, more than three minutes ahead of Bianca Beavitt in second and Candice Murray in third. Nicole Birkett finished in fourth while Chloe Bunnett rounded out the top five in fifth.

The full list of results can be found here. 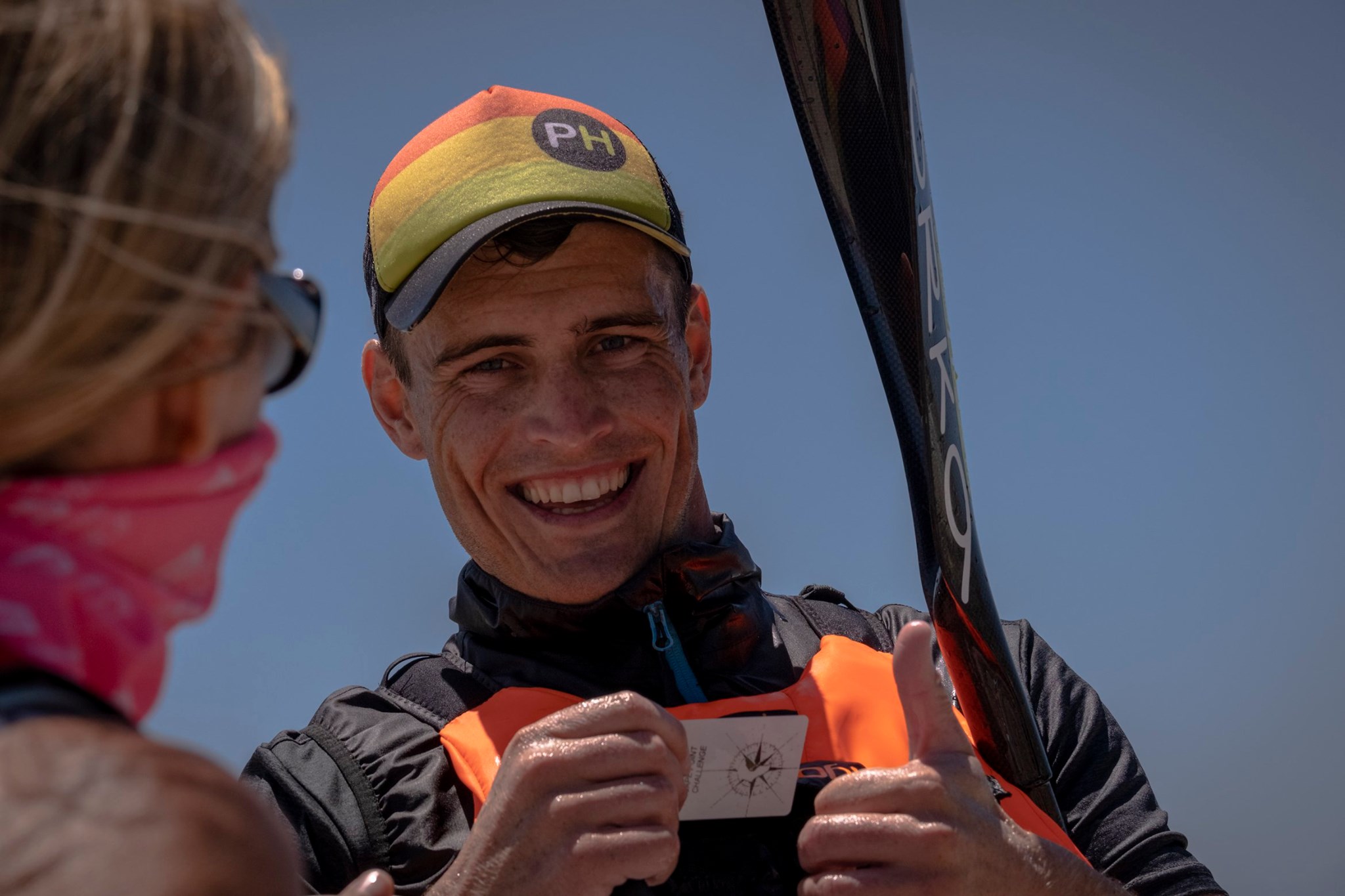 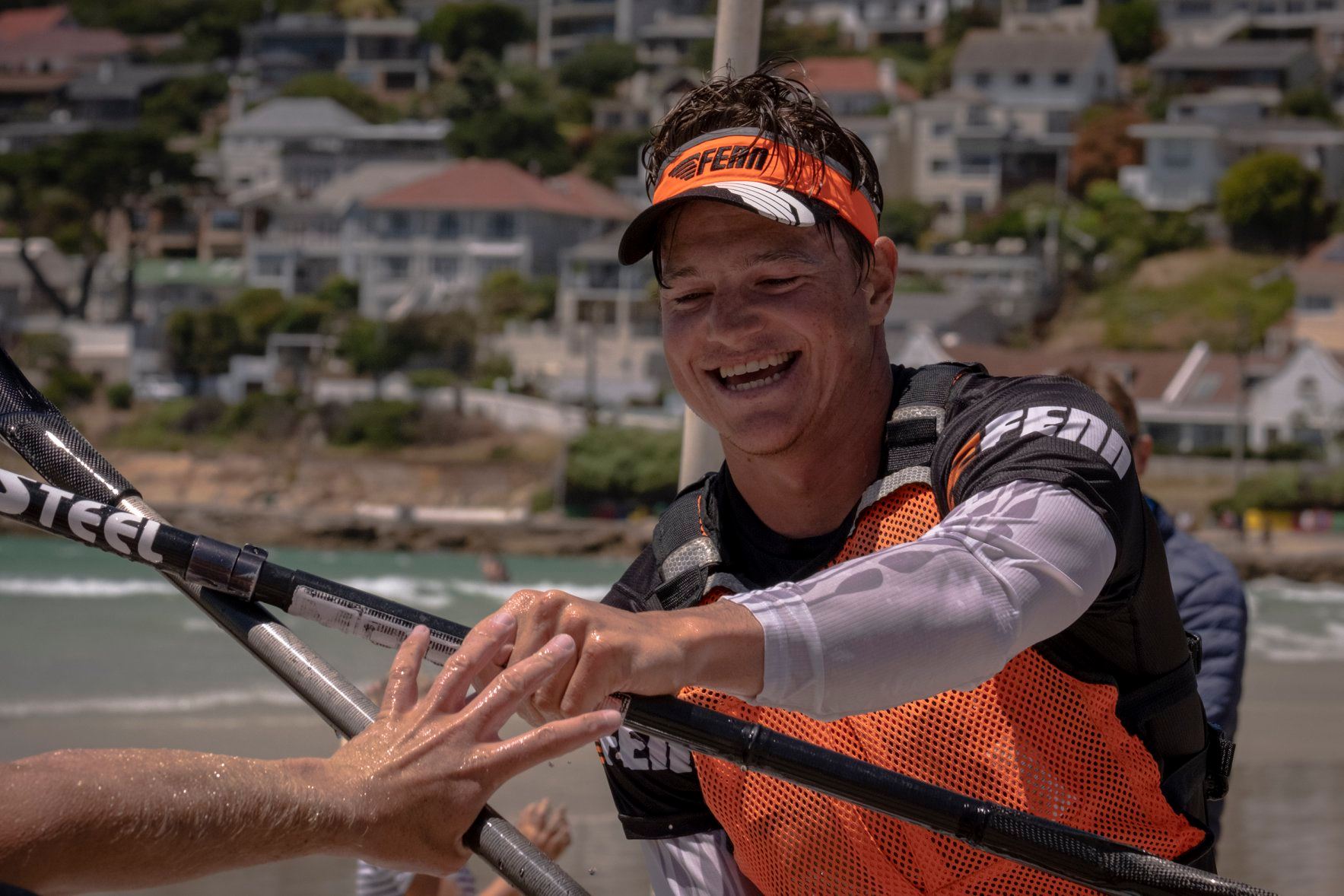 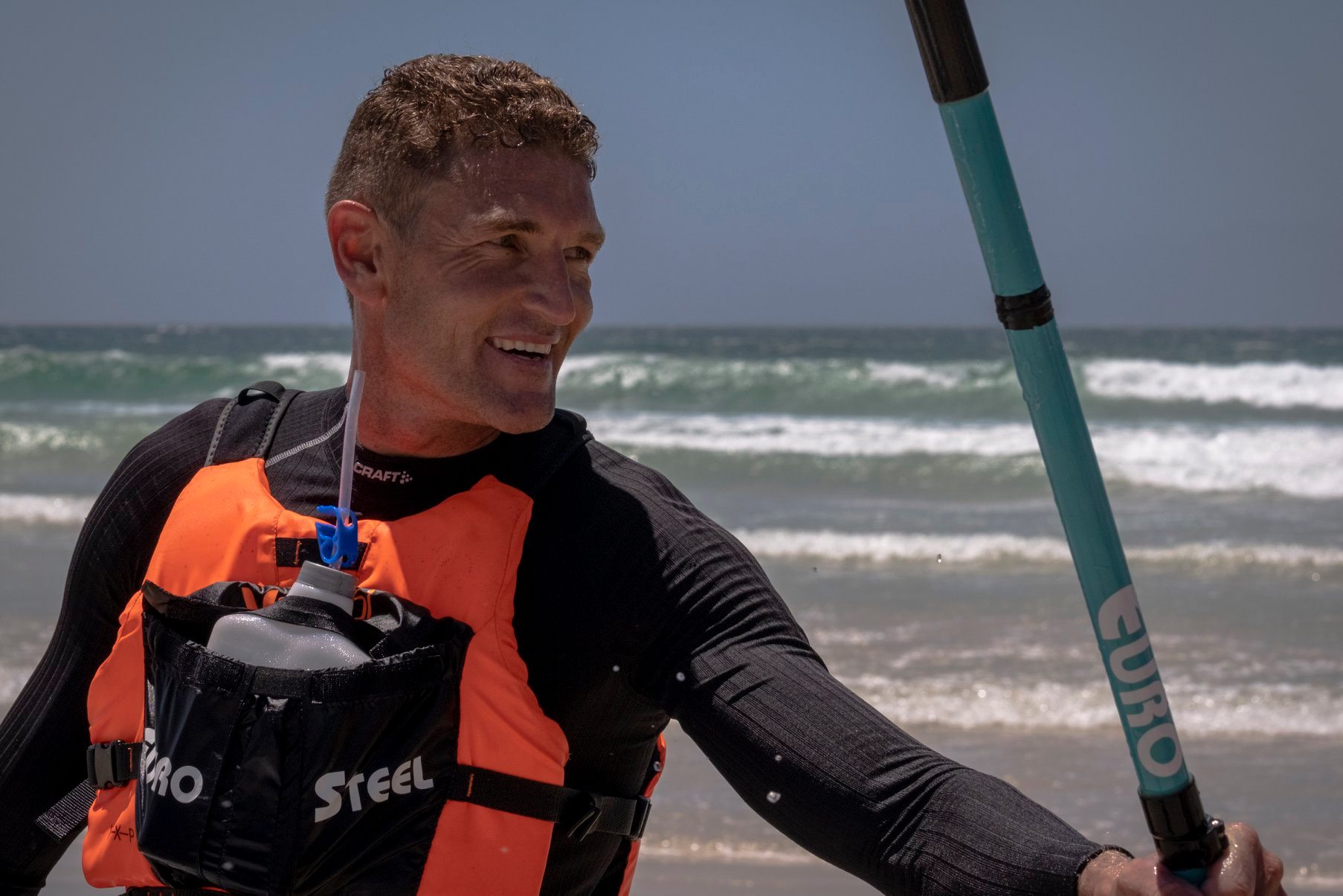 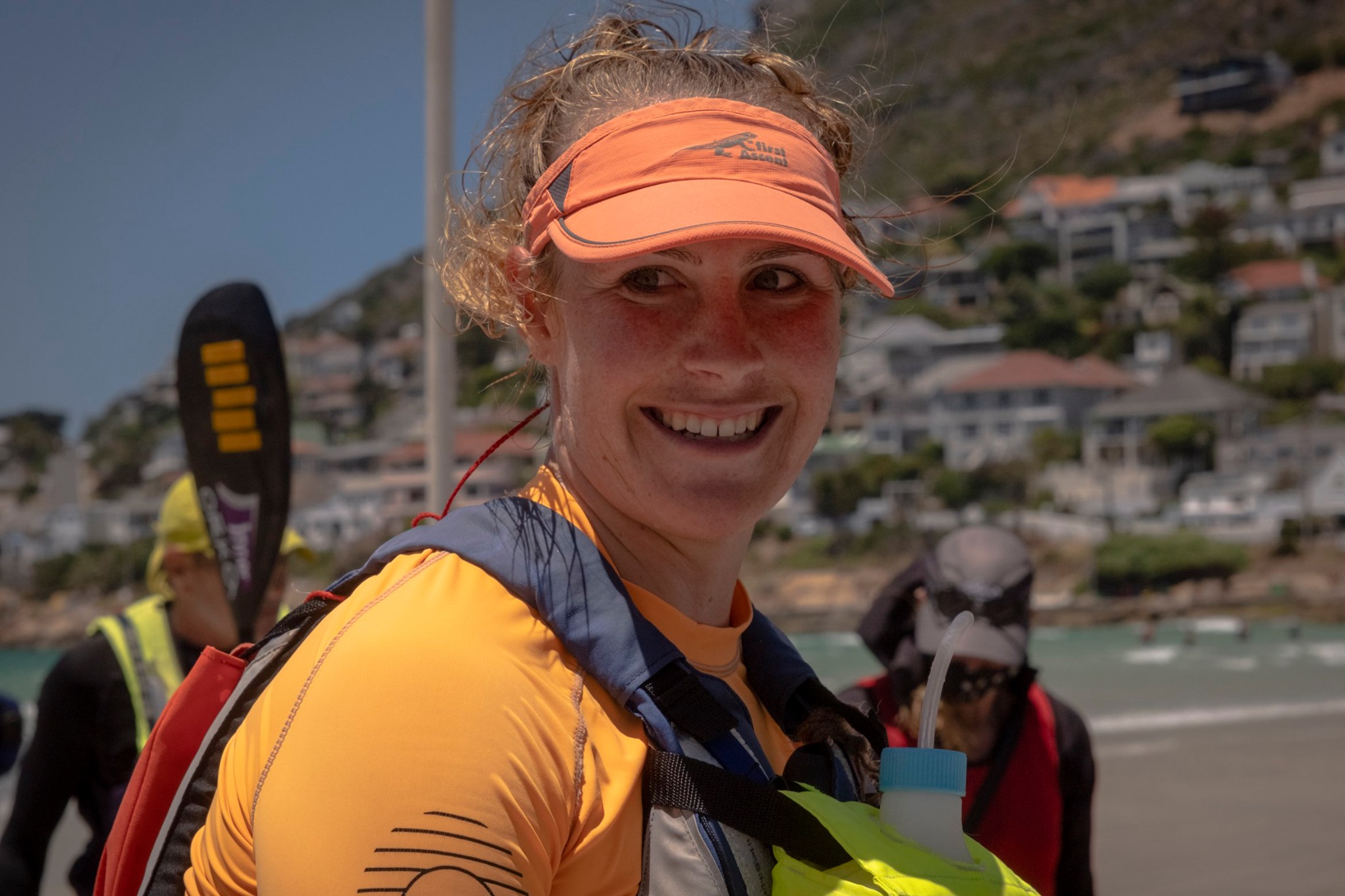 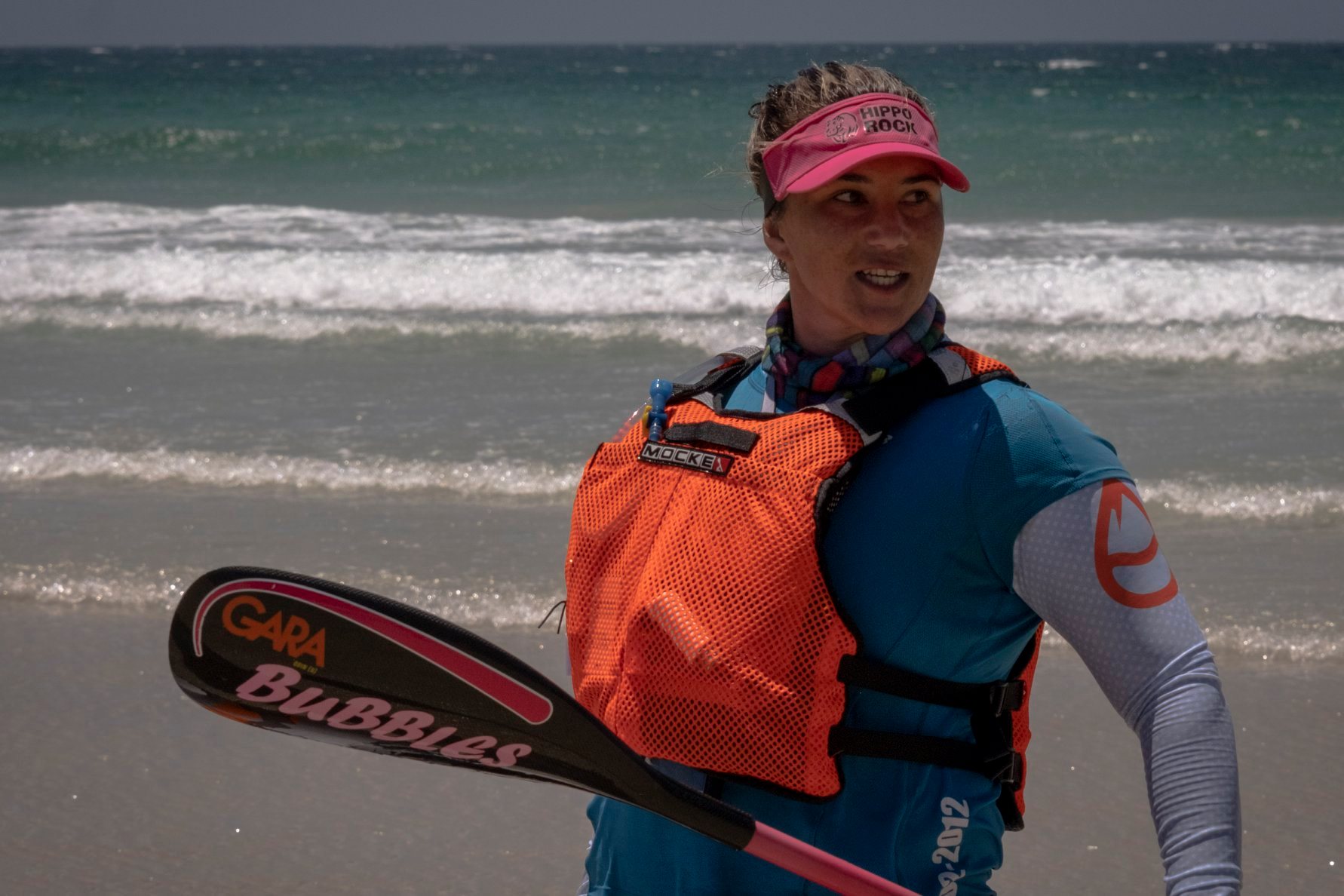 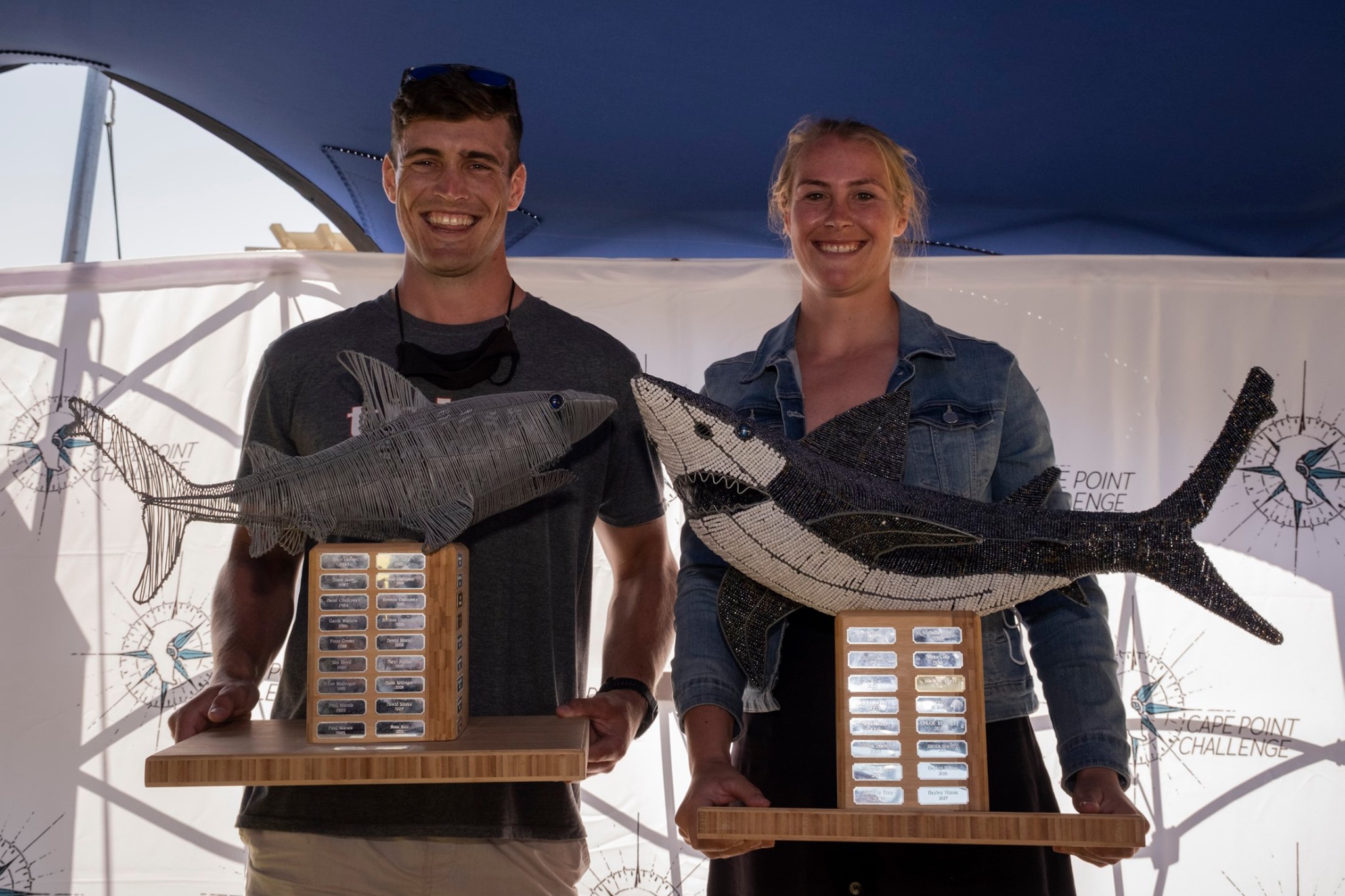 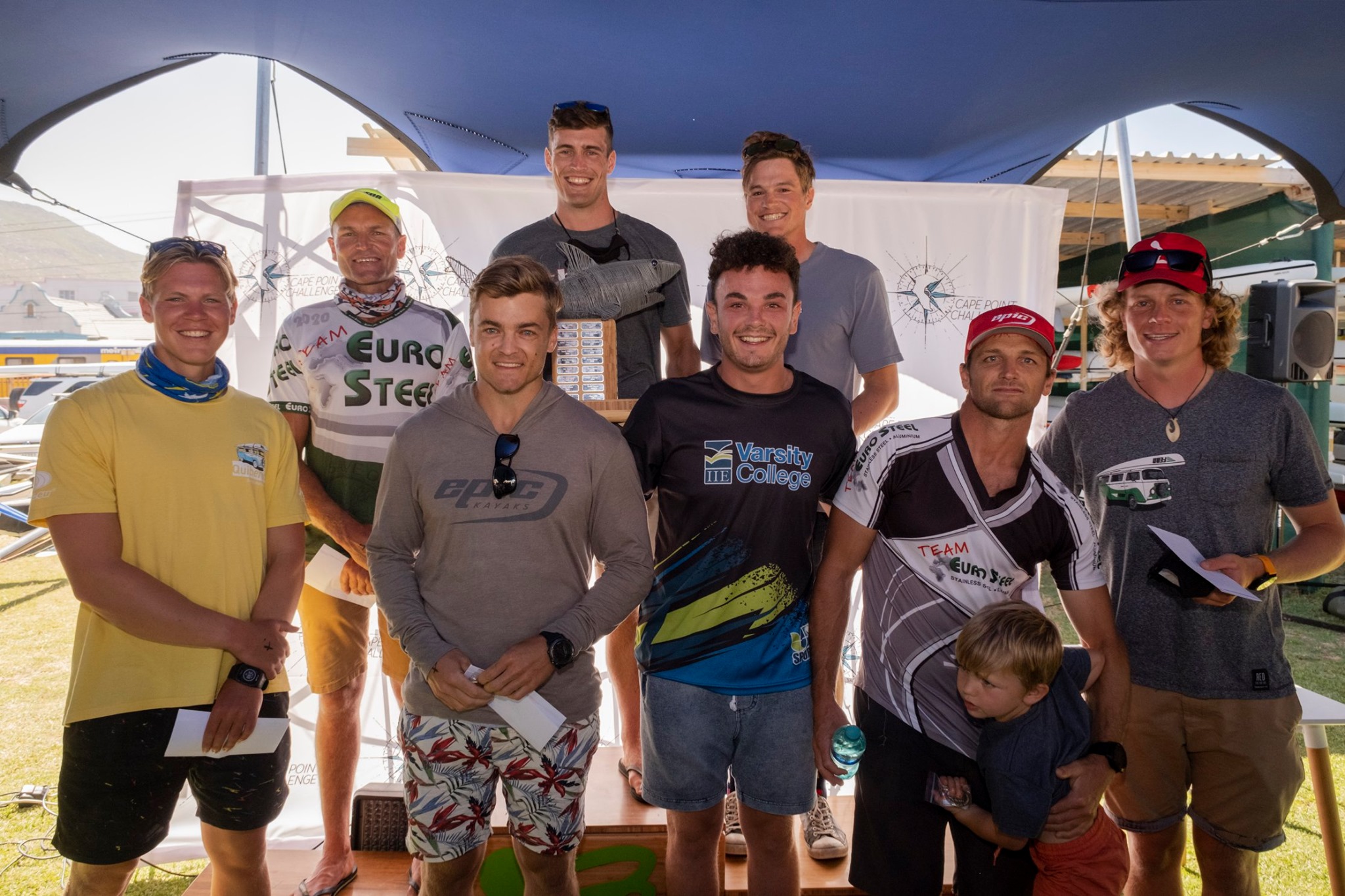 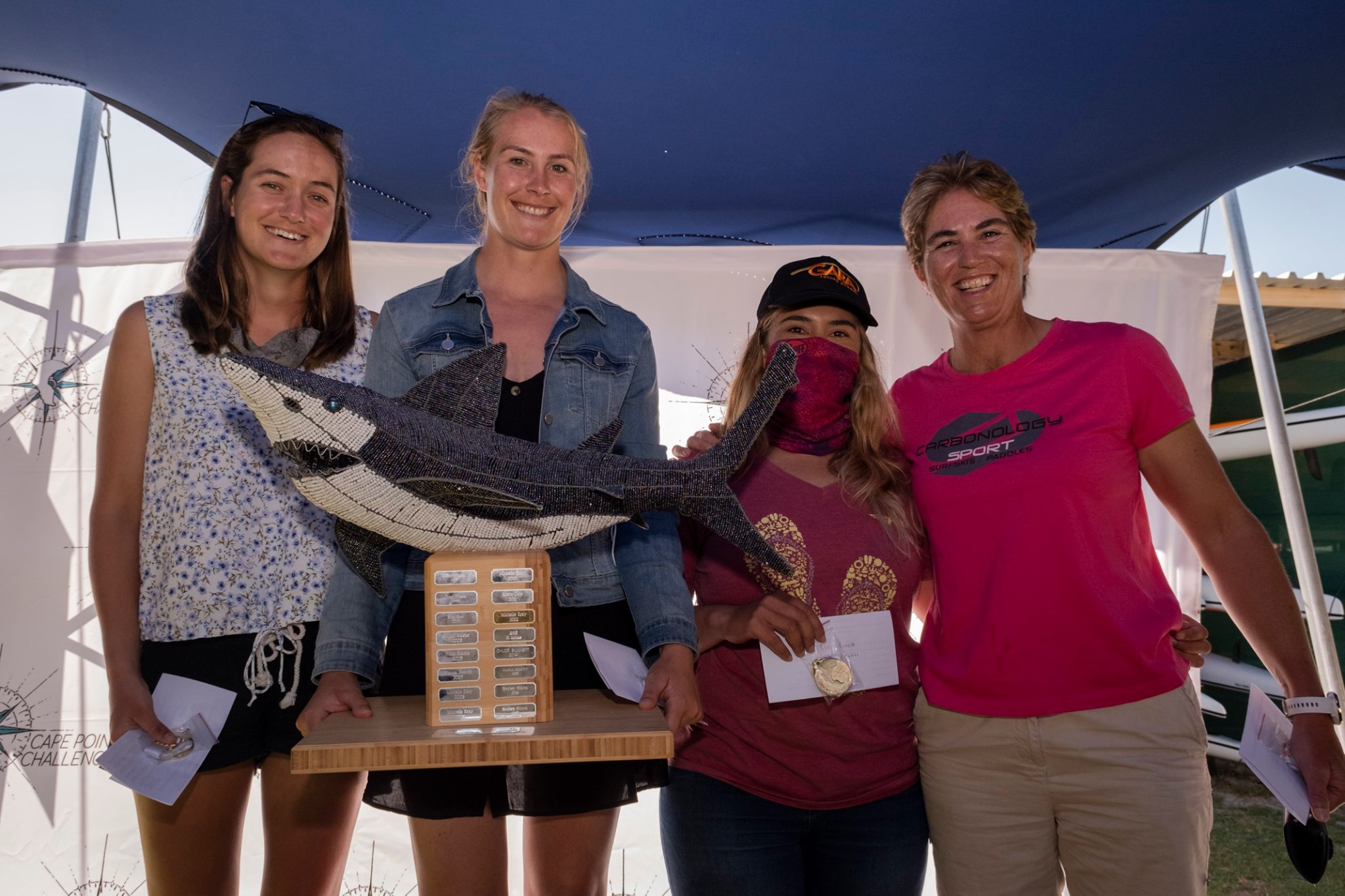 GALLERY: It was a gruelling race, but it was all smiles at the finish line. PHOTOGRAPHS: © Barbara Cole.

“It means a lot because of how unsure I felt coming into it,” Rice says.

“I know everyone here is good enough to win – and Hank is more than good enough to discipline us and win it by a long way – so from that perspective, it’s really, really satisfying.”

“Yesterday I was trying to eat a quiche and a coffee in the morning for breakfast, but I struggled because I was just so nervous.

“It reminded me of when when we first went to San Francisco [for the US Surfski Championships], Sean [Rice] used to say, ‘What the hell? Just eat something!’”

“It was actually quite refreshing to be nervous heading into a race again.”

But Rice wasn’t so nervous that he couldn’t appreciate the significance of what was unfolding.

An initial bunch of around a dozen paddlers on the opening upwind leg quickly reduced down to four on that first lap.

In fact, Hart actually broke away on the second lap, opening up a somewhat sizeable lead.

“He is paddling really well and he’s improving a lot, which was really cool to see,” Rice says.

“But we’re calling him Captain Courageous now, because paddling that seven kilometres upwind on your own is a big call to make,” he chuckles.

By the time they turned at Millers Point for the final time, Rice held a slender lead ahead of the three other paddlers.

Soon it was the two best friends, Rice and Notten, who found themselves side-by-side – and the battle was on.

Although they had already clocked 45 kilometres of paddling, that final downwind stretch saw the pace drop below 3 minutes 20 seconds for each kilometre as they pushed each other to their limits.

It was a scene they had lived out countless times before in training.

“That was one of the biggest things in my head the whole time,” Rice admits.

“I thought about how hard Nicks has trained and how awesome it would be to see him win… but then I would remember, ‘Oh, no I want to win!’”

“It was difficult to be switched on the whole way to the line when it’s your best mate, and it really was super rewarding that it was the two of us at the front versus everyone else.

“I think Nicks was particularly chuffed, and it was good for him because he’s now realised that he can win it.”

“And that only makes me go harder.” 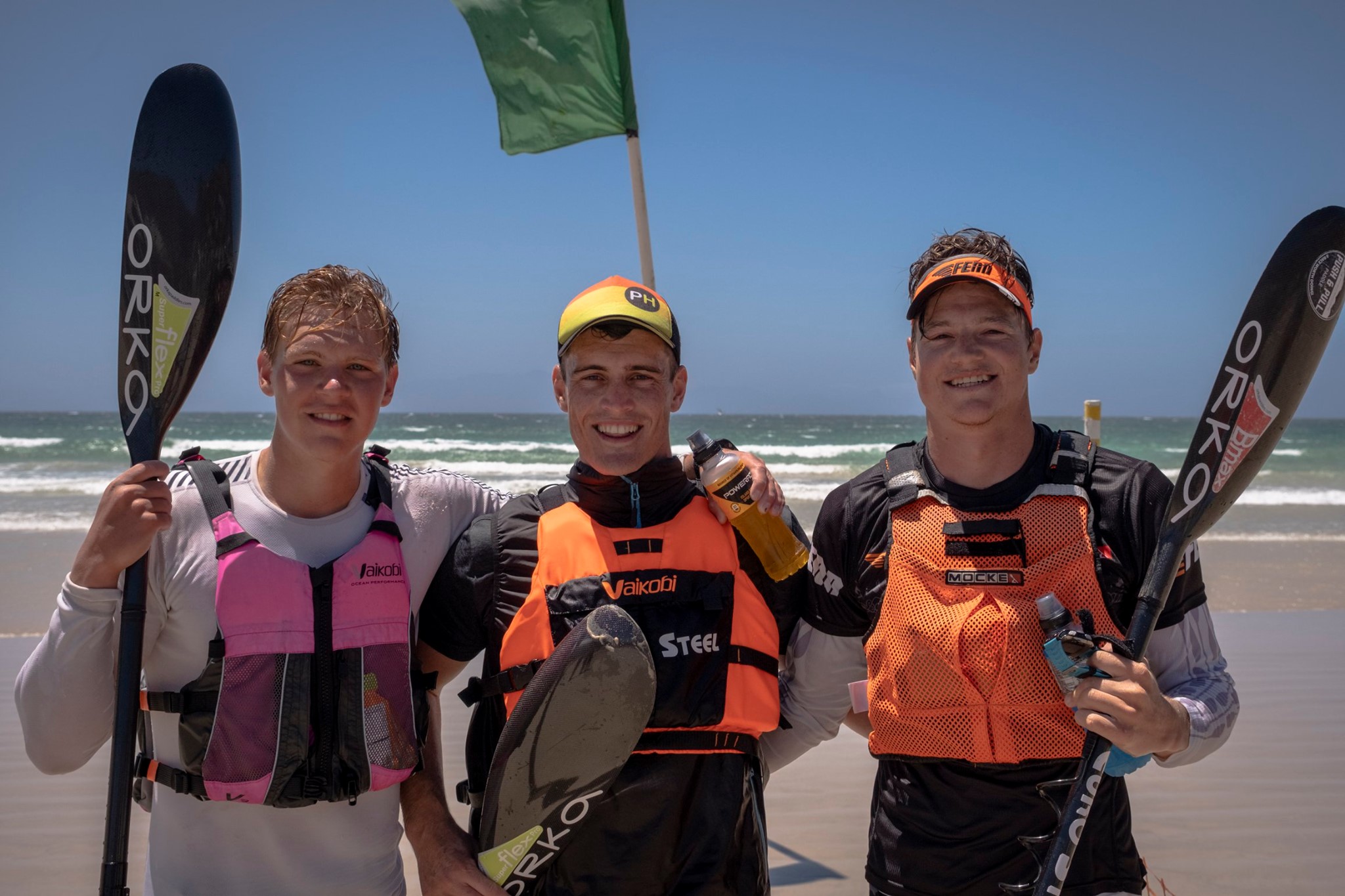 The result also delivered Rice a slice of history.

His third title means that he’s just the second paddler to claim more than two wins in the event’s esteemed history.

It moves him past some of the most decorated paddlers the sport has seen in Oscar and Herman Chalupsky, David Mocke, Paul Marais and Peter Creese.

“It just shows how not a lot of people have had a firm grasp on this race.

“Hank’s eight is ridiculous – but it’s now not a long shot of me dreaming to get there.”

For now though, Rice is just happy to bask in the triumph of 2020.

And that’s not just celebrating his own achievement – but also

“Oscar actually asked me after the race, ‘Is this a sign that we need to have more local races?’”

“I think this whole COVID year has grounded everyone.

“It’s so great to travel overseas and race internationally against all of the Aussies and others, but I think over time we lost some prestige on our local South African races.

“Because of the staggered start, on the downwind legs we were paddling past the people who had started earlier.

“Once or twice I dropped down a run going past people and got to stop and say ‘howzit’ and keep going… there was a really good atmosphere around the race, it was really cool.

“I feel this whole local lockdown has given a new lease on life to local races, as well as fresh ideas for them.”

“The racing will kick off here again in the New Year and everyone seems to be wanting to race so much more now. 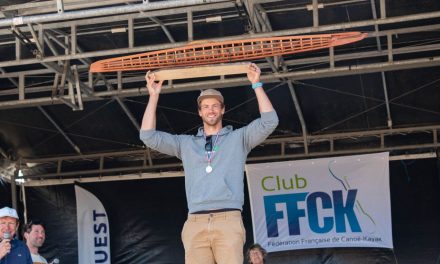 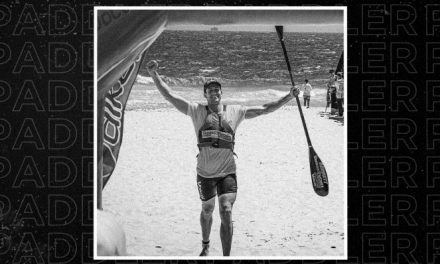 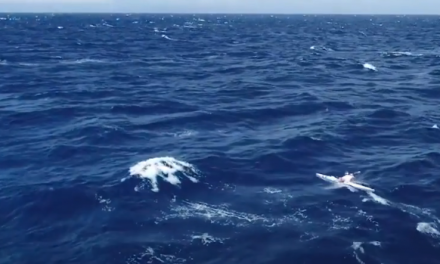