Kieffer (USA) clocked a time of 50 minutes and one second for his chosen 12 kilometre course, finishing more than one minute ahead of two-time world champion Cory Hill (AUS) in second place and Nordin Sparmann (GER) in third.

“I am more excited and happier than I ever thought I would be for winning a virtual surfski race,” Kieffer admits.

“And I say that because in a normal year where I’m getting to race some of the best athletes in the world, in some of the most incredible locations on the planet, a virtual race where I’m uploading a time certainly seems like small potatoes.

“But in a year like we’re having with potentially no races on my calendar… The fact I was able to compete in an internationally competitive surfski race from the comfort of my own backyard training ground was something I was absolutely thrilled with.

Competitors were challenged to complete an out-and-back course of their choosing, starting and finishing in the same location, and post it online.

That, as well as the fact that wash riding or group racing was allowed, brought a level of tactical intrigue to the event.

“I had a lot more fun than I was expecting just by engaging in the whole process,” Kieffer admits.

“Everything from planning what I thought what would be the optimal conditions, deciding where I was going to execute my course, strategising on how to fit it into my training schedule and also coming back to fitness as soon as possible.

“It was a really fun, almost problem-solving exercise for me – on top of the fact it was going to be a gruelling, physical 12 kilometre time trial.”

The American quickly realised his training ground was “one of the best locations for this in all of Southern California”, and he planned accordingly.

Each session where he thought the conditions may be ideal, he would do a “test” – two minutes of paddling at 80 per cent into the wind and two minutes back – before comparing splits and weighing up an attempt.

He pulled the trigger three times. The first gave him the lead early in the event’s window, before being usurped by Sparmann.

It was his third effort that proved to be the winner.

“I absolutely sent it for that first six kilometres,” he recalls.

“I probably mis-paced the effort a little bit because I went a little too hard in the first three kilometres and you can see on my splits that I dropped off on the second half upwind.

“While that was a little bit of a novice error, it put me in such a positive position knowing what good conditions I had coming back that I was really optimistic turning around.

“I knew I was right on the edge of what I needed to do but catching that first wave downwind I just clicked into downwind racing – which has only happened for me a handful of times when I’m truly in the zone of race intensity.”

And to claim the win over a star-studded field makes Kieffer’s virtual championships experience even sweeter.

“For the last three years I’ve just been chasing an international win, and I know this doesn’t quite count,” Kieffer laughs.

“But I think this is a step in the right direction of chasing that ultimate goal for me.”

Her time was submitted on the final day of the month-long window, after being forced off the water for a week to recover from having her wisdom teeth removed.

“I needed to leave it as long as I could to regain some strength,” Clarke explains.

“I can’t believe I’m saying this, but Sam [Mayhew, her fiancé] dragging me to do some swim training when neither of us wanted to paddle paid off.

“Luckily on the day we had planned, it just worked out.

“We used the tides and pushed each other by working in a pack and then once we turned after 6 kilometres, I hung on for as long as I could.

“I eventually fell off but was able to record a great time.”

Being a New Zealander, the event takes on extra significance for Clarke.

She says the race concept is “great”, but doesn’t believe it should be used for a national championship.

“I wish it was a stand-alone championships, and I would have been a lot more supportive.

“I had a lot of fun preparing for my race and a lot of strategy went into it, but the nature of a virtual race also brings the impossibility of it being fair sport or fair racing.

“To add it to a national series that saw many of us spend money to attend, our hold it as our national titles, I found really disappointing.” 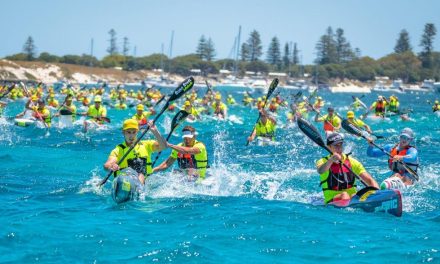