For those familiar with surf lifesaving, Shannon Eckstein needs no introduction.

Simply put, he’s the greatest ironman of all time. A nine-time Nutri-Grain series winner and eight-time Australian champion, with 41 gold medals to his name across all events.

But last year he hung up the club cap and entered the same race as everyone else – that eternal juggle between family, career and fitness. And as he explains in his exclusive In The Boat article, it was ocean ski racing that helped him make the transition.

I never fell out of love with ironman racing.

Even in my last year at the age of 35, I cherished every second going around the cans. I’d been doing it for the best part of 20 years and it forms such a big part of your life.

It’s the training that forces you to make that decision. You can’t keep going forever at that level, and I definitely had reached that point.

This may surprise people, but finishing second in the Australian ironman final – my last race – I was actually happy just to be still in contention with the best in the sport, even though I came so close to the fairy tale finish, as well as a feeling of relief.

There was a celebration of my career in the last couple of events, which was really cool. To have people look back and respect what you’ve done was something I found to be really special. But I also wanted to move on and focus on my family and new job, and those important things in life I may not have been able to pour as much time into.

And I also wanted to let my hair down. My off-seasons are always pretty good. You tend to be pretty dedicated and look after yourself throughout summer when you’re racing, so May, June and July are pretty good months for me to kick back – and last year I certainly did.

It really hits home when you can’t put on your pants anymore, or when you split them open.

I realised it was about finding that balance – and I always knew surfski paddling was going to be the outlet to do it.

You see old guys in lycra riding bikes. For me when I retired, that was my bike riding – to get in the ski and have a paddle.

I was always going to do something that fits in with your career and family life, and I think the ocean ski is perfect for that.

It’s not too taxing on your body and it’s good fun, but you still push yourself enough to keep fit and go to a few races for have a good time with that competitive edge.

I did a little bit of ocean ski paddling at the beginning of my ironman career. When you’re younger, you tend to focus on the swim and board, but not so much on the ski. So to improve, I turned to ocean ski paddling.

I joined Northcliffe in 2005 and Pat O’Keefe was the coach at the time. He was really, really tough and we did a lot of long-distance paddling and downwind sessions.

I was only 22 and had been on the ski for just a few years, so I hadn’t done anything like it. The Coolangatta Gold came back into the series in 2006, and starting with a 23 kilometre ski leg, I decided to go down to Sydney and compete in a few of the national races at the time as part of my build-up.

The pace was on. I was going head-to-head with guys like Jeremy Cotter and Tim Jacobs and it turned my ski leg, which had been my weakness, into my strength.

In the first few events, I was able to hang in there with those guys for around 80% of the race although would fall away towards the end. But soon I consistently found myself on the podium.

I enjoyed racing the domestic series back then. It fitted in well with pre-season training for Ironman and I also liked that you didn’t have to sit on the beach all weekend waiting for your race. The quality of racing was so high too. It was the best way to improve my paddling and I’m sure I wouldn’t have got to where I did without it.

I eventually went to Hong Kong in 2009 for the Dragon Run and actually won that race. It was such a memorable trip. I flew in the day before and lucked out with really good runners. I think Jeremy might have got second and Tim was in third, so it was a world-class field. 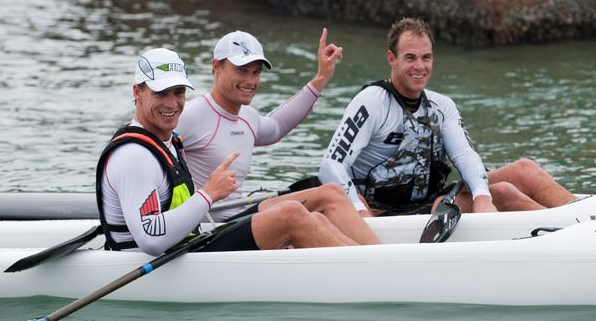 Surfski paddling was in a really good spot then. It was just before the Dubai Shamal took off and there was big money in that. I never got the chance to get over there though, because ironman was always my number one focus. But I loved the racing.

So now retired, I knew the sport would help that competitive void – the thing that I was missing most. Regardless of ability, you can get to a race, feel nervous and have that desire to test yourself.

I went to Hawaii and did Molokai in a team event with Earl Evans from Shaw and Partners, and that was a really great trip. I probably paddled twice between Aussies and Molokai, although that was kind of expected.

But I enjoyed the experience and just being back around the sport stoked that competitive fire enough for me to refocus and aim for a return to Hong Kong and the Dragon Run.

With the nature of surfski paddling, there’s no reason that if you’re putting in the time and effort, you can’t be up the front when you’re still in your 40’s. You see someone like Dean Gardner still doing well when the conditions are right. In downwind, you always have the element of skill – how you read it, how conserve energy, how you push down runners.

All these things work in your favour as you get older. You may not be the fastest in the flat, but you still have the nous in the surf. I think that’s something that’s always in the back of everyone’s mind.

But I also wasn’t kidding myself. It was my first year retired and I wanted to let my hair down, and that meant not getting up for early training sessions a hell of a lot. At the same time, I also wanted to keep fit and not blow out either. It was all about balancing that.

The Gold Coast is always a pretty good place to train throughout winter, but it is dark and cold if you get up early enough – and Jeremy Cotter’s Currumbin squad paddles at 5am.

I drove down there a few times but it was difficult when I wanted to take time off and relax – not make the drive down there just to get flogged. It’s always an even longer drive on the way back. You need to train for two or three months before you can have good quality sessions and get back up there again, so I didn’t rush it.

Some of the races I did over the course of the season I was disappointed with. But I had to put it in perspective with the work I put in and how seriously the other guys take it. They’re all world-class paddlers so if you want to mix it with them, you have to put in the work.

I think I tried to convince myself that I was no longer that full-time athlete anymore, and that it was now all about having fun.

But when you are having a good, solid hit-out against the rest of the squad, you get that competitive drive back and lose sight of that mindset.

You want to push yourself and really hurt yourself – you never lose sight of that. I was kidding myself if I thought I was simply going to have a good time rather than try to do my best. That’s something you always want.

There’s always a certain level of expectation that you place on yourself – as well as the one that everyone else puts on you. I found the work to be hard on my body, especially because I had kept telling myself approaching my last Aussies that ‘this is the last hard month of training, this is the last time I’ll do a session like this.’

So to finish in the top ten at a few races was really cool. And so was returning to Hong Kong exactly 10 years after my win there.

Some things just don’t change. There’s a really strong camaraderie and morale in these ocean ski races. Everyone is really good mates, and while they want to push each other and beat each other, they still say ‘well done’ and have a beer at the end.

That was the same back then, too. There was always a really healthy rivalry between the Australians and South Africans. Hank McGregor, Matt Bowman, Dawid and Jasper Mocke. That dynamic between all of the paddlers is still like that now.

I left my ironman life behind, but that’s not to say I don’t miss it.

I really enjoyed not having to go swimming and training this past year but I definitely missed the feeling of stepping onto the start line.

I watched a few of the Kellogs’ races and really missed that atmosphere, the competitiveness of it.

I admit, there were times I thought to myself that I could’ve gone one more year.

Especially with what happened to Ali Day, breaking both of his wrists and missing the entire season.

It was probably a year where, if I did go again, it would’ve been easier to be really competitive without the better guy being there.

But those thoughts are all part of the transition. I’m enjoying my new job and the time that it’s given me. I’m excited to keep doing ocean ski events – but I’ll have to be paddling a bit more than twice a week to mix it with the best in the world.

I’ll never say never. The racing that I did last year definitely puts me in good stead this time around.

But for now, I’m just enjoying being out on the water in the ski.

My version of bike riding in lycra. 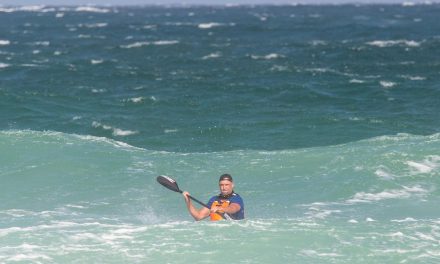 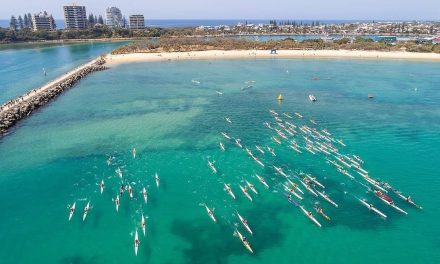 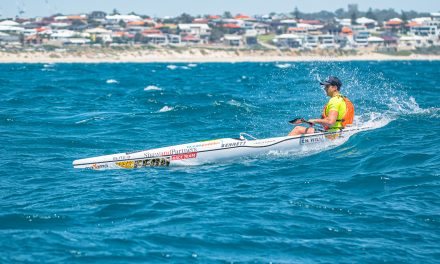 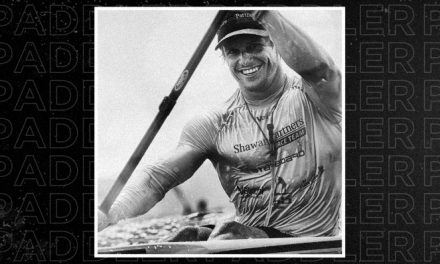