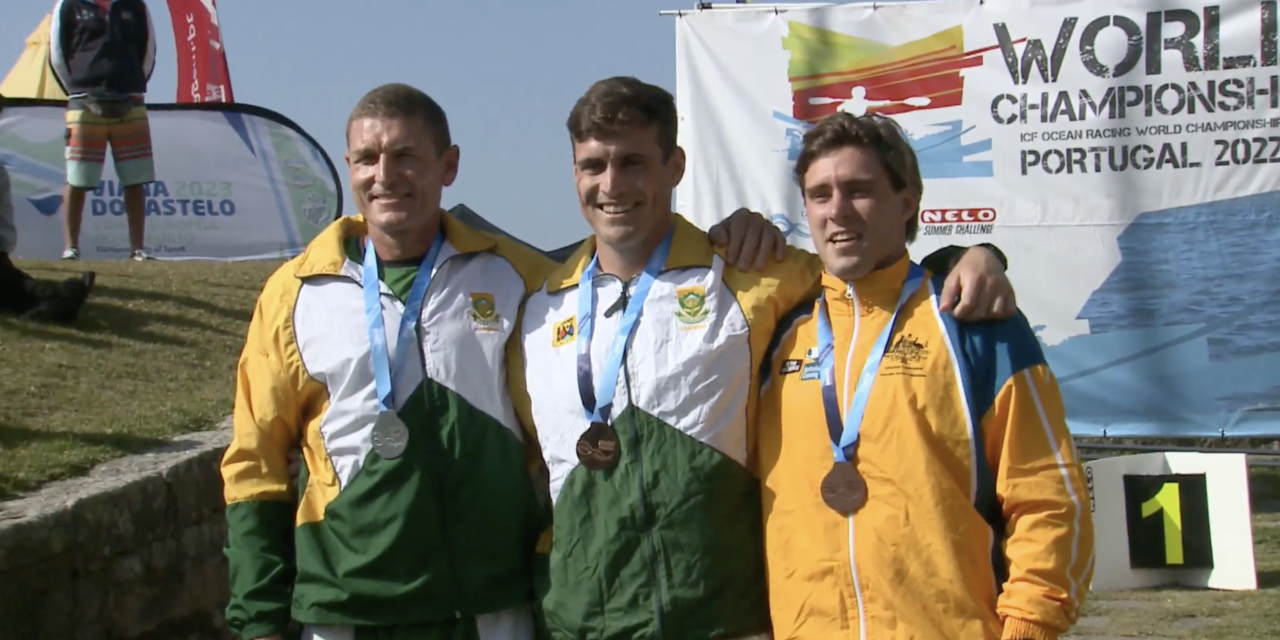 KENNY RICE COMES INTO HIS OWN AFTER WORLD CHAMPIONSHIP WIN

Portugal has always held a special place in the hearts of the Rice family.

In 2013, at the first ever ICF Ocean Racing World Championships, Sean Rice announced his arrival on the global stage by claiming the inaugural gold medal in a commanding display, with younger brother Kenny doing the same in the Under 18 category.

Nine years on, and just a 20 minute drive up the road, it is Kenny who has assumed the title of the world’s best paddler, breaking through for the biggest result of his career.

“It’s surreal,” he told The Paddler standing at the finish line.

“It was one of those special moments for us. It’s so good to be back here and have a similar feeling nine years later.” 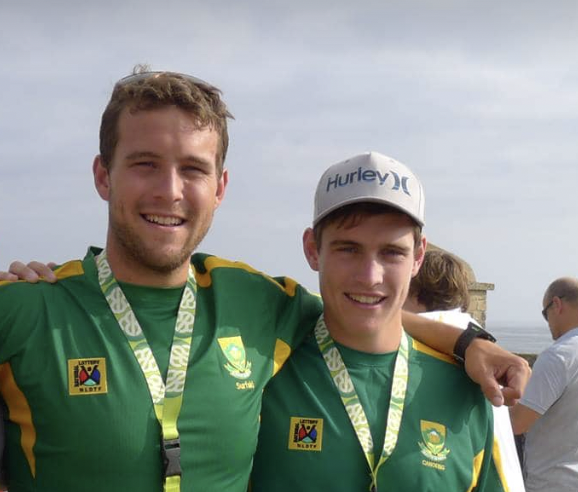 Sean and Kenny Rice at the 2013 ICF Ocean Racing World Championships in Portugal.

The title of World Champion is one Kenny has always appeared destined to claim, but in order to actually get there, he has been faced with a number of difficult decisions.

One of them saw Rice end his long-term partnership with Think Kayaks to join the race team at FENN.

As tough as that was, the gamble has paid off.

“I’m not naive enough to think the change is the be-all-and-end-all,” he says. “Think did so much for me and I am so appreciative of that.

“But I feel this has really been me stepping out of Sean’s shadow, in a way. I don’t want that to sound negative, but I’m me. This is my coming.”

“I’m really glad to have proven I could do it, especially in conditions like these.

“I don’t think anyone would have pegged me to have won today.” 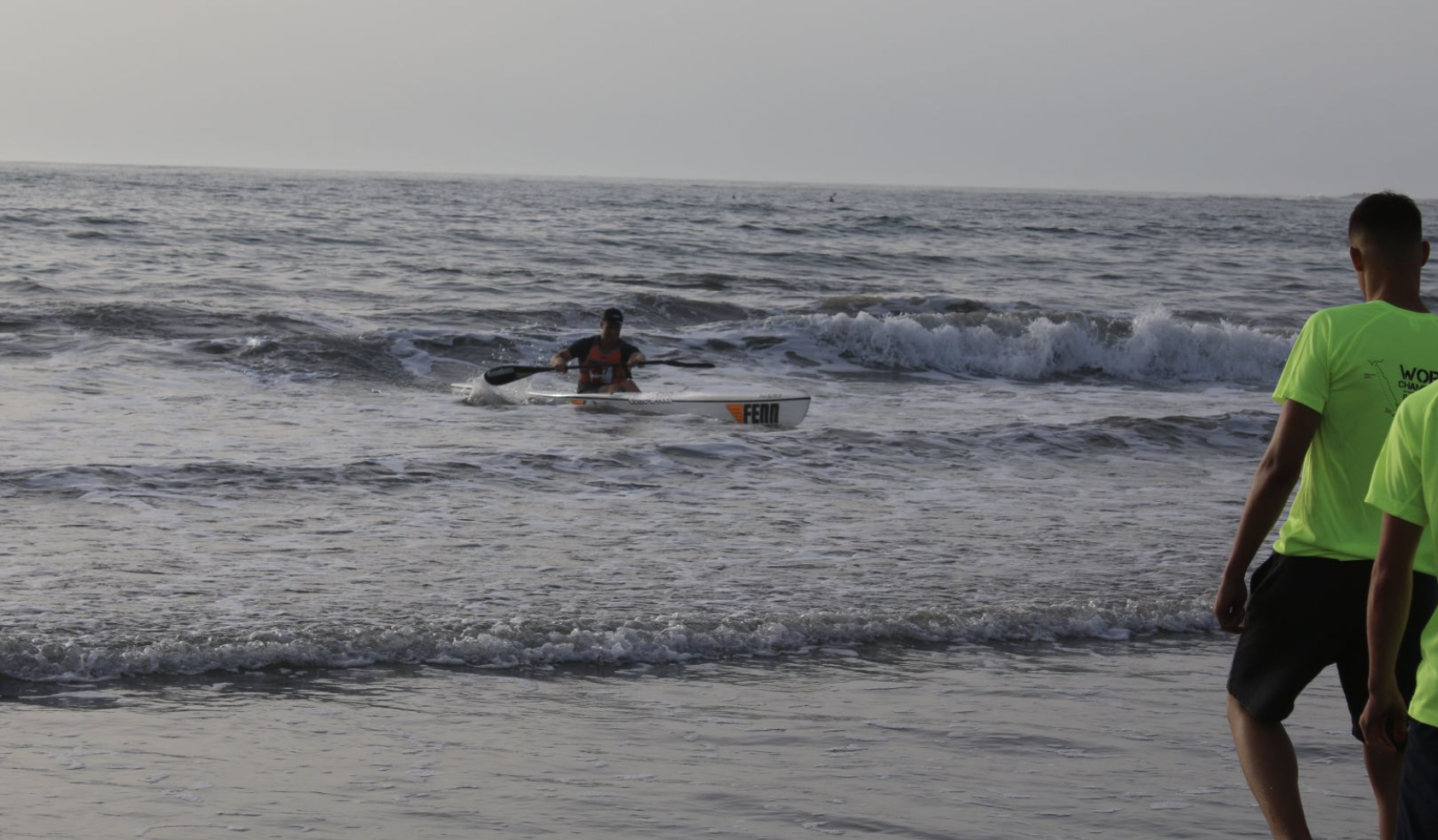 Kenny Rice on his way into the sand to become the new World Champion.

Like when the region hosted the World Championships in 2013, the wind disappeared.

Although this time around, the monster field of 585 athletes did some have groundswell to chase over the 20 kilometre course, coming over the right shoulder.

The mass-start was like few others the sport has ever seen.

Yet despite the chaos, after the opening kilometre, all of the contenders had made their way to the front.

The men’s race was wide open.

On the inside line, Jackson Collins and Hank McGregor set the pace, while out wider, Rice and Cory Hill had their noses in front of at least a dozen other athletes all pushing hard.

“I got to 10 kilometres and thought, ‘Ken you’re going to be in a fight for a top ten finish bud,’” Rice laughs.

The Championships were a war of attrition. And by the 18th kilometre, it had become a race in two between Rice and McGregor.

“I sussed it all out and saw Hank and thought it was race-on with him,” Rice recalls.

“If I could beat him, I knew it would be a good day in the office. He came here for business.

“Not that I didn’t, but I look up to him and the way he holds himself.”

It was, in fact, a good day in the office. 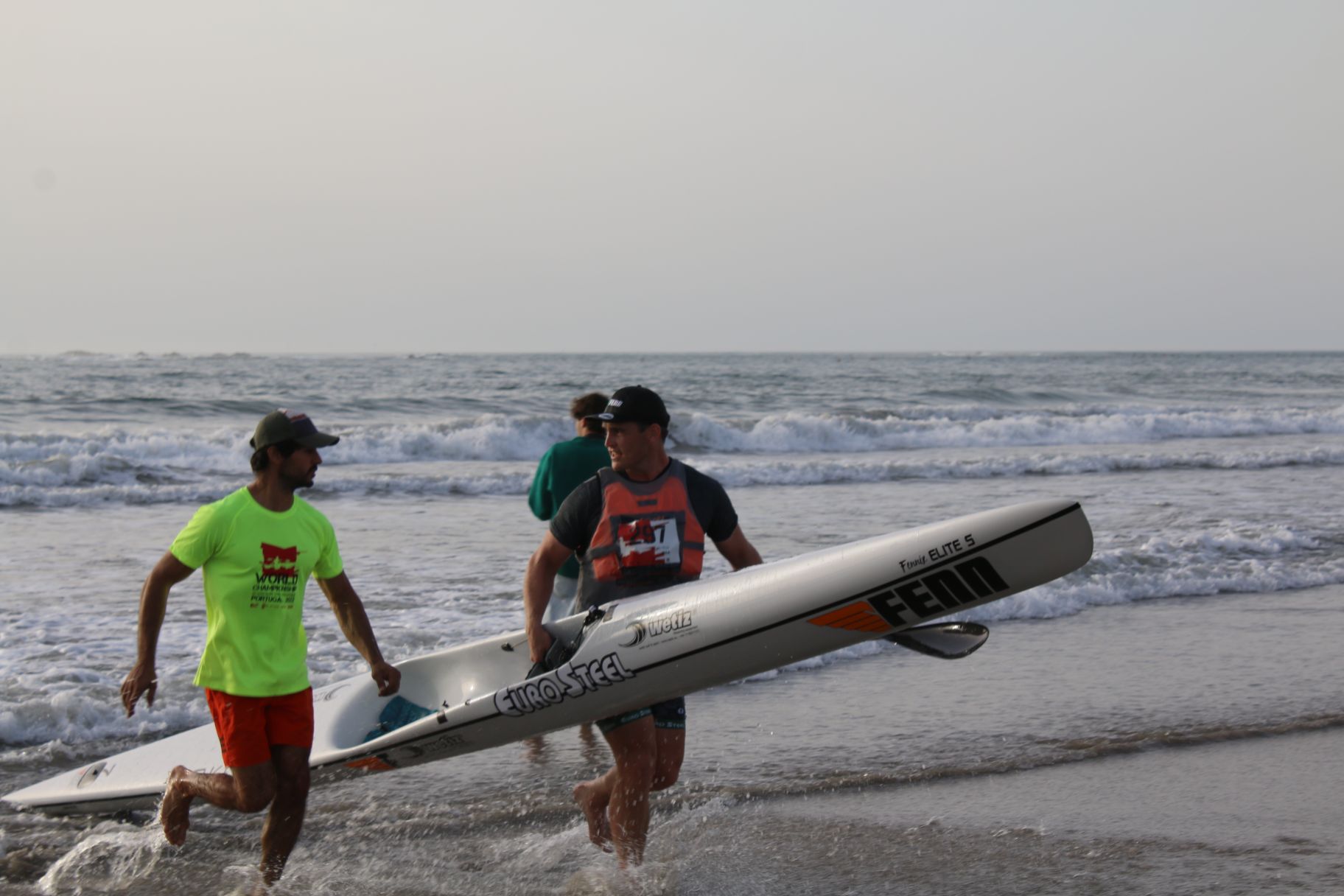 Rice admits he didn’t know he was about to become the new World Champion as he jogged up the beach.

“I tried my best and came away with a close second,” McGregor says. “There was 30 metres in it in the end, Kenny came in from the outside and just had a better last two kilometres than I did.

“We didn’t really know we were first and second at the time. We passed Danielle [McKenzie] just before the finish and I thought there wouldn’t be anybody ahead of her in these conditions.

“We saw a FENN hit the beach early and thought it was Cory [Hill] or Nick Notten… and it wasn’t until someone came up and said ‘congratulations, you’re first and second’ we started laughing.”

“I tried really hard and I couldn’t have asked for more. I’m happy with the result and I guess I have to come back next year and get that elusive title that keeps slipping away.”

“Win or lose, I’ll always give it my all and shake the hand of the winner… hopefully one day that will be me.” – Hank McGregor

Having claimed several podium finishes at the biggest downwind races around the world, this was the most impressive performance of Mackenzie Hynard’s career and seals what has been an outstanding resurgence after time away from the water.

“Yeah I’m pumped,” he says. “It was hard, but it hurts a lot less when you get to stand on the podium and hold you head high representing your country.

“Kenny was just really strong. I had a race plan and I stuck to it, when maybe I should have gone with him.

“But I can’t be negative about that. I raced as well as I could’ve hoped for and to come out with a third behind some amazing paddlers is really special.” 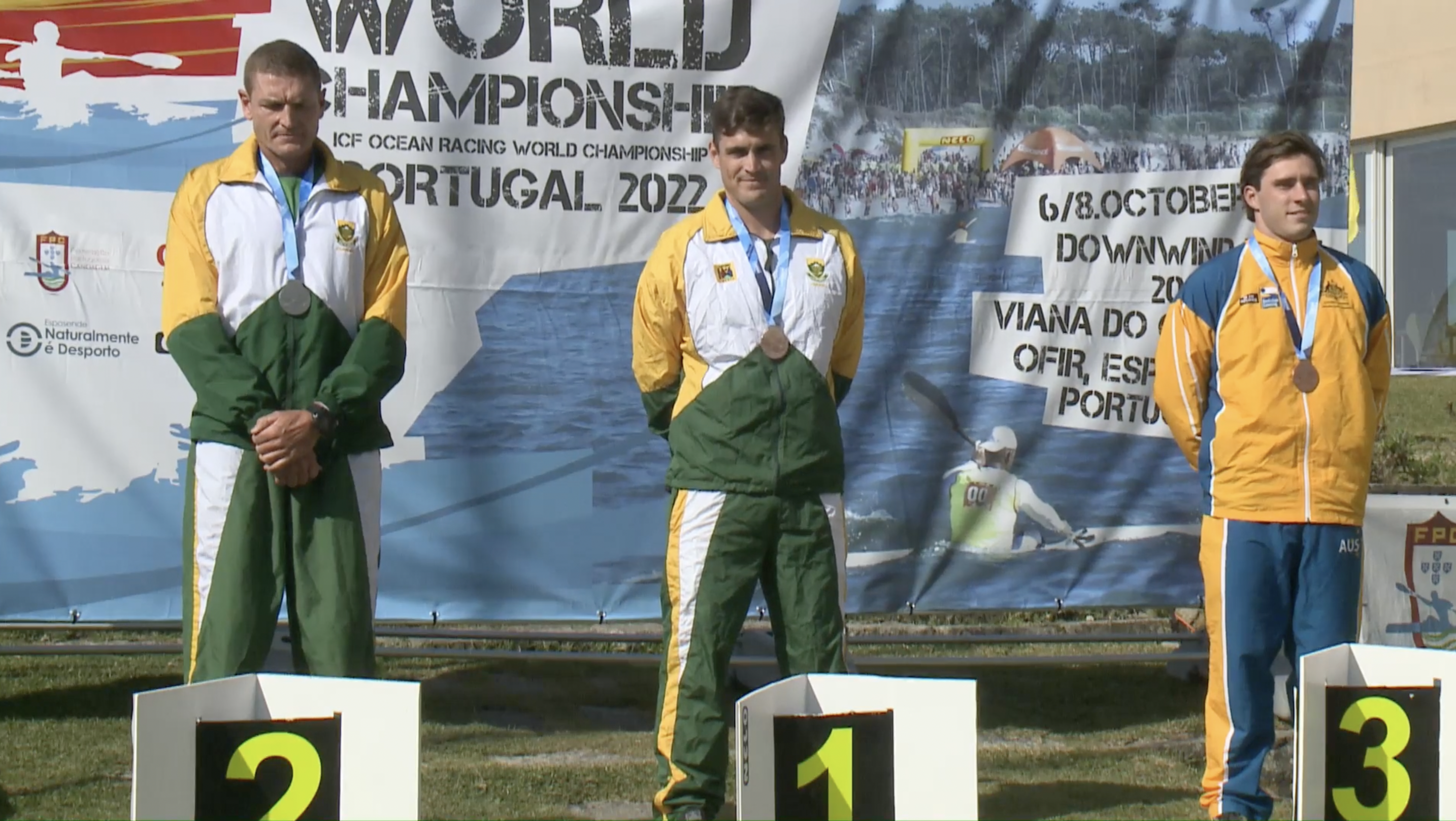 Jemma Smith is the new women’s world champion, finishing ahead of Danielle McKenzie and Michelle Burn in another classic battle.

To read all about the women’s race, click here.

Although this result cements Kenny Rice’s status as a surfski star in his own right, older brother Sean was front of mind at the finish line.

Sean was unable to contest the World Championships, which would have been his first since winning a second title in 2019.

But watching from afar, he was able to share another special moment with his brother on the sand, just like they did all those years ago.

“I got my phone from Mac’s mum and turned it off flight mode and it just buzzed with so many messages, and immediately Sean was calling,” Rice says.

“I think he’s really proud. It was so nice to see the three of them [Emily and son Sebastian], it was really special.”

“I’ve always looked up to my brother. He’s always been the pinnacle for me. To take a step onto that platform now is just surreal. I’m so happy.”

“I’ve always thought of myself as the lemon of the field, but now I have a world title to add to that.” 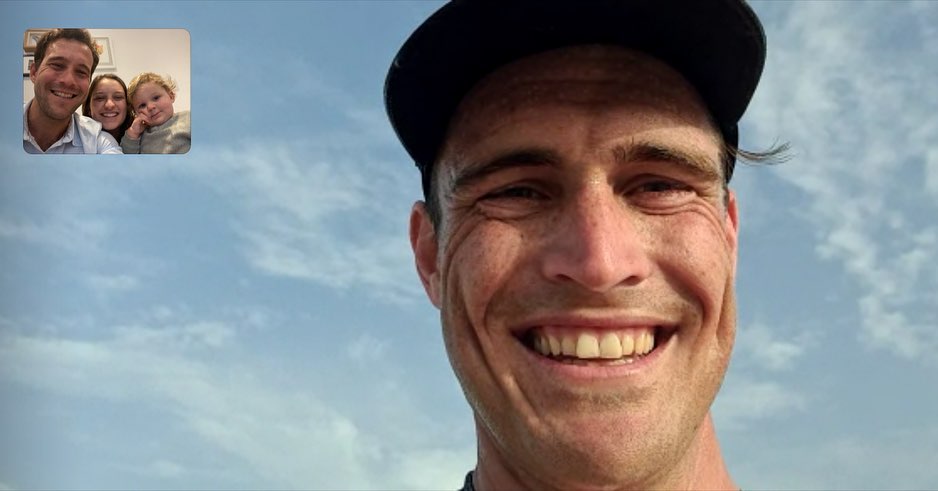 The smiles say it all. Kenny Rice on FaceTime to his brother Sean, Emily and Sebastian Rice. 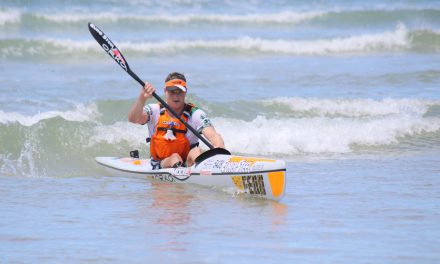 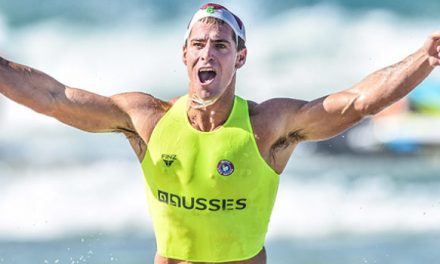 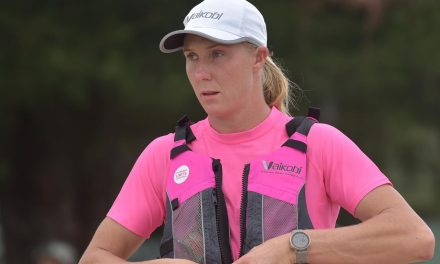 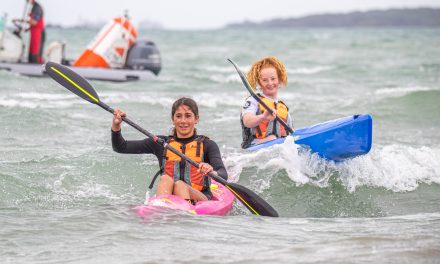